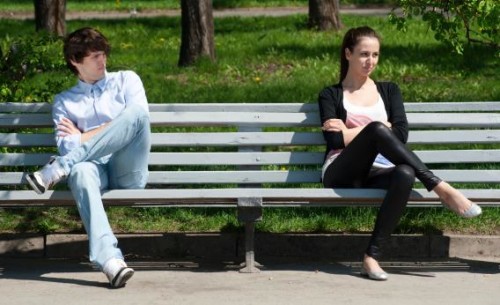 I won’t miss you.

When saying a final goodbye to those unloved items in our lives, some people can get a bit teary eyed, but what if we’re not interested in making up and staying together? This is the point when we’re finally ready to move on.

Let’s have some fun breaking up with our stuff

Here’s a melodramatic imagining of kicking a significant other, called Clutter, to the curb. Warning: I’ve used as many clichéd one-liners for breaking up as I possibly could, for a poignantly emotional comedic effect.

“Clutter, we need to talk…

I don’t think this is working out. I realize now that this whole relationship has been a huge mistake. Bringing you home was a horrible decision. What was I thinking? I really thought I would love you forever (and maybe I even did for a while) but now it’s over between us. Every time I see you I feel guilty because I wasted so much money on you, but I rarely enjoy having you around. You make my place look bad and you make me feel bad. At this point, breaking up would be a good idea for both of us.

I need my space! You are taking up valuable square footage that I could be using for yoga or dancing. I think I’ll donate you, or see if you’ll sell online. Now that you’re going, it’s clear that I’m not sad at all. I actually feel relieved! For fifty cents (or nothing) I’d give you up in a yard sale. I don’t even care if you go to a good home. They might never dust you and cover you with sticky fingers, but good riddance!

I confess that I no longer find you attractive. I had some ridiculous idea that my room would look nicer with you in it, or that maybe you would be helpful around here. I don’t know why it took me so long to realize that you don’t fit in my life at all! Plus, my priorities have completely changed. I know what I want now – and it’s not you. We’re breaking up.

But wait, are you crying? I admit that I’ve been unnecessarily harsh. I don’t need to be so nasty. It’s not you, it’s me. It’s my fault for being tempted by the alluring display at the store. Everything was styled and coordinated. There was a beautiful salesperson and subtle music playing. Normally I can resist, but my defences were down and I totally caved into the pressure. Cha-ching! is the super short soundtrack of my error. But, hey, I can admit when I’m wrong. I can learn from my mistakes.

I would say, ‘Let’s be friends‘, but we both know that rarely works out. Goodbye Clutter! We’re breaking up & it’s final! Even though you are now heaped in a pile of useless items I previously thought I wanted, I actually do wish you good luck.

You’re going to make someone else incredibly happy someday. You deserve better. Someone else will appreciate you much more than I can.  I wish you all the happiness in the world.”

Well, as you can see, Clutter had absolutely nothing to say for itself. Why we can get so emotional about mere things is a mystery, because Clutter apparently had no feelings for us whatsoever. Good thing we’re not wasting any more of our time or energy taking care of Clutter. We’re moving on with our lives. Let’s celebrate!