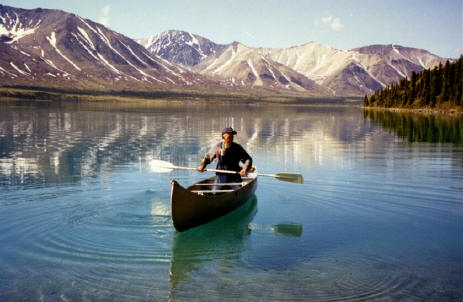 Alone in the Wilderness, Dick Proenneke survives in remote Alaska for 30 years.
Image by Gary Titus

Alone in the Wilderness is a inspirational documentary about Richard (Dick) Proenneke during his self-reliant adventures in the Alaskan wilderness. It’s an awesome account of his exploration of the simple life.

5.5 millions views on YouTube show how intriguing and enticing the simple life can be. “With a score of 9 out of 10 from the aggregation of nearly 2000 votes at the Internet Movie Database, the documentary is one of the highest rated of all time.”- Wikipedia

Here is part one:

Beginning in 1968, Dick Proenneke spent 30 years in Twin Lakes, Alaska while documenting his progress through film and journals. Every evening he made a journal entry in a 6″ x 9″ notebook and over 30 years he accumulated 60 pounds of journal notebooks! He wrote some enlightening thoughts on simplicity,

“Needs- I guess that’s what bothers so many folks. They keep expanding their needs until they are too dependent on too many things and too many other people. I wonder how many things in the average American home could be eliminated, if the question were asked, ‘Must I really have this?’ Funny thing about comfort. Most people don’t work hard enough physically anymore and comfort is not easy to find. It is surprising how comfortable a hard bunk can be after you’ve come down off a mountain.” -Richard Proenneke

No doubt he slept soundly every night. He carried a pedometer for one whole year and learned that he had walked 3,081 miles!

Spending so much time in nature, he caught some wonderful footage of local wildlife including caribou, moose, grizzly bear, hare and badgers. He said, “I’d sooner pack a roll of film than a gun”, although he did hunt for food while living alone in the wilderness.

At age 51, he dared to test himself to see if he could handle the bone-chilling cold of winter, the isolation and silence. The challenge of building a cabin, planting crops and hunting while living alone in the remote bush was thorough self-examination. He asked himself, “What was I capable of that I did not know of yet? What about my limits? Could I truly enjoy my own company for an entire year?”

He was an extremely skilled woodworker, felling all of the timber and lugging it onto the site, then building a log cabin all by himself. Not only that, he also build the furniture as well as a very tall cache to keep his food safe from hungry predators.

Clearly he was a tenaciously hard working guy and a truly inspirational character. He constructed everything by hand and thrived on his own with no electricity or running water. He enjoyed canoeing, snowshoeing and feeding wild birds from the palm of his hand. I love that he decided not to bring a motor for his boat. He agrees that, “A motors’ noise stills the sounds of the wilderness.”


Richard had a wide range of talents and experiences. He had been a carpenter in the US navy in WWII, a diesel mechanic, a welder, a heavy equipment operator, a well driller, fished commercially, tended sheep, and originally went to Alaska to start a cattle ranch. His varied skills were put to the test during his time alone in the wilderness.

For most people, it is impossible to even imagine doing what Richard Proenneke did. He was very skilled, brave and definitely a risk taker, however, eventually age and ill health caused him to move to California to stay with his brother, where he died in 2003 at the age of 87.

He wrote, “I have found that some of the simplest things have given me the most pleasure. It didn’t cost me a lot of money either. The world is full of such things.”