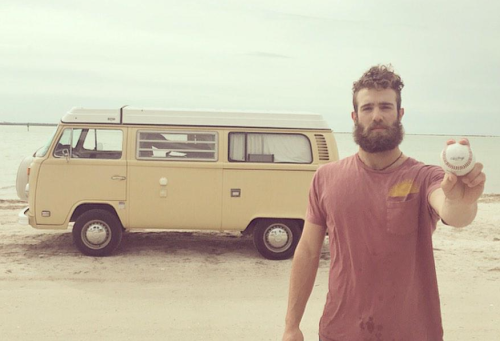 As a “top prospect in the Toronto Blue Jays organization and widely regarded as one of the top young pitchers in baseball”, Daniel Norris is a minimalist maintaining his roots in the simple life.

Although he signed a bonus worth over $2 million, Norris spends his offseason living in a 1978 Westfalia. Most people would have gone a little nuts with a couple million bucks in the bank. They’d be tempted to buy a whopping amount of unnecessary stuff. Suddenly receiving a couple of million dollars would inspire a hoard of people to magically pop out of the woodwork, asking you to help them out or buy things from them.

And then there’s Daniel Norris. He’s doing his own thing and keeping it real. Rather than buying flashy sports cars and living out of hotels, he’s camping out in his van and working out in unconventional ways. “He digs the solitude and the surf, makes his meals on a camping stove and brews his coffee in a French press, sharing his Kerouacian travels on social media.” – thestar.com

I love the outdoors. I grew up in the outdoors and that’s why I love it. I’m passionate about it — being able to be with the environment and having a relationship with it on a personal level, because you’re living in it,” Norris said. “My dad’s had [the mountain bike shop] for 35 years. His dad had it before him. I’ve been mountain biking my whole life. I’ve been hiking my whole life. “Through backpacking, you really learn to be self-sustainable, and not only through backpacking but also living out of the van and even hiking,” he explained. “That’s a really important thing and it feels really good to be able to take care of yourself.” – milb.com

He’s someone who appreciates having some space. ‘I love my teammates and family but I’m not the kind of person who likes to be around a ton of people. I’m a thinker, I like to be alone with my thoughts.’  ‘When I’m out there, it’s just me, Shaggy (his van) and God and I can really connect with myself. It’s very peaceful.’ – Daily Mail

This 6 minute video gives us a glimpse into Daniel’s van and thoughts on the simple life.

He talks about spontaneously exploring interesting and remote areas while living nomadically, he says,

This is what I live for. This is the way I was raised up and that’s what I enjoy. Just ‘cause money’s there doesn’t mean that you gotta have nicer things than you used to have, you know. No amount of money can really buy this.

To be fair though, Westfalia vans are super cool. His is a vintage model with it’s inherent quirks. If you have never been inside one, I can tell you that the design is extremely well thought out. They have elegantly sophisticated transforming interiors, while looking unassuming from the outside. In other words, an excellent minimalist abode.

Daniel’s story is a great example of how minimalism is not determined by the amount of money one has. Minimalism is about streamlining our lives to do more of what we love.