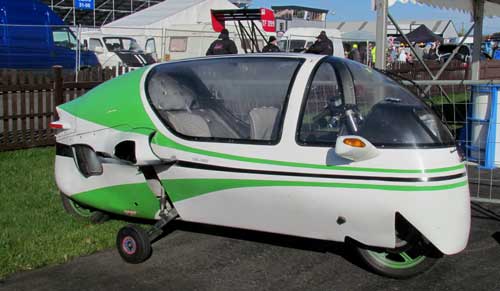 Ecomobiles: were supposed to be the super vehicle of the future – decades ago
Image by ozz13x

Currently I don’t drive, but if I had an EcoMobile, I’d reconsider.

Like all of my friends, I got my learner’s permit and took a driver’s education course when I was a teenager. But I didn’t get my driver’s licence until years later because the government announced that the regulations would become much more strict. They wouldn’t allow night driving for about a year, and the new driver had to be accompanied by a seasoned driver for a long time as well. Since I was already in my early twenties and not living with my parents, it would have been very difficult to find a seasoned driver to join me, plus I had plans to drive across the country. That was incentive enough to get my license and a small hatchback.

More fresh air for everyone

I used to smoke cigarettes. For many years I was harassed by perfect strangers for polluting their precious air. When I asked if they drove a motor vehicle that polluted the air far more than my tiny cigarette, they never acknowledged their hypocrisy. Let’s admit it now. Cars are a giant part of the problem with our world. Even if they are electric, billions of tons of pollutants are used to build them and to construct and maintain the roads. So, the fewer cars, the more fresh air there is for all of us.

There are many alternatives to each person owning a car. I live in a large city with plenty of public transportation. There are buses, streetcars, trains and subways. Or, one can rent a car, hire a taxi cab or Uber, call a pal, carpool, or car share.

I’m in my mid-forties and have recently embraced the joy of extensive bicycle riding.  Just a couple of summers ago, I cycled over 5000 km on a camping adventure to the East coast of Canada. It’s amazing how far one can get by simply not turning around. It’s a matter of keeping the wheels spinning rather than collecting moss while standing still. If you want to know more about my exciting cycling tour from Ontario to Newfoundland and back, I will be writing about it more in another post. (You can read it here: Minimalist Cycling Adventures.)

Other people are bad drivers

It is also true that other people driving their cars scare the heck outta me. No doubt you’ve heard lots of people say, “I’m a great driver. It’s the other people who are the problem.” But, if everyone is such a great driver, who is causing all the crashes? No one likes to think it’s them. Most people don’t think of the environment as part of themselves, or think they are part of the “traffic”. They’re thinking, “It’s the traffic that’s the problem, not me!”

When I was ten years old, I was a passenger in a 5-car pileup on a very busy highway in Toronto. The car was completely destroyed and I was not wearing a seat belt. No bones were broken and I can’t explain that. Several years later I was in a school bus when it flipped over into the ditch. No seat belts there either. Children were flung about the bus like a shaken box of Tic Tacs. Due to these scary experiences when I was young, I had more fear and awareness of the possibility of danger than a lot of drivers.

I still might enjoy driving, but I’d prefer doing so at 3 am with no other people around. It’s too bad everyone seems to think they are a good driver and it’s always someone else’s fault. I accept that I’m nervous and realize that feeling this way might cause me to hesitate at a cusp moment. So I choose not to endanger anyone. I also know for a fact that I am exceptionally calm in dangerous situations (I considered a career as an EMS), so I am far more afraid of the distracted, uncaring way a lot of people drive than of my own ability to observe and react correctly. They seem oblivious to the potential danger, and veer around like nothing matters, and that is scarier than anything else to me. This is the most populated city in the country, with the most crowded driving conditions, the most collisions, and as a result, the insurance costs the most. Those are more reasons not to drive.

I won’t deny that having a motorized vehicle can be supremely handy at times. That’s why so many people drive. It’s a type of time travel. You hop in here, and in a few short minutes, *Presto!*, you’re extremely far away from where you started. Teleporting would be the best, but we still haven’t perfected that yet.

Minimalist Vehicle to the rescue… but Where is my EcoMobile?

Years ago I saw a show demonstrating an incredible prototype of an egg-shaped vehicle called an EcoMobile or MonoTracer. It’s like a motorcycle, but more comfortable and safe. Being so small, it’s very fuel efficient and can be parked anywhere. When the driver slows down, stops at a stop light, or tips during a turn, stabilizing wheels automatically emerge from the sides to prevent falling over. It’s climate controlled inside, so unlike riding a motorcycle, there’d be no need to wear a full leather outfit in the middle of summer, or worry about getting drenched if it rains. It has a roof, windshield and seat belts, so there is no need to wear a giant helmet. Also, one could have a normal conversation, rather than being deafened by the noise of the engine or the wind.

Normally, I find most vehicles very similar to each other and uninteresting, but I was keenly excited for this one to go into full production. I kept expecting it to soon be accessible to test drive and become more affordable for the average person to buy. However, it has been about 20 years since I heard of them, yet they are as rare as ever and super expensive.

Most cars contain only one person, although there is generally room for 5 people in every vehicle. If more people drove two wheels rather than four, there would be more space and less traffic congestion on the roads. Smaller vehicles also pollute less, use fewer resources, and cause less wear and tear on the roads.

Unfortunately, like the much anticipated flying car, I still don’t have an EcoMobile. Yet. Until then, I’m not driving.