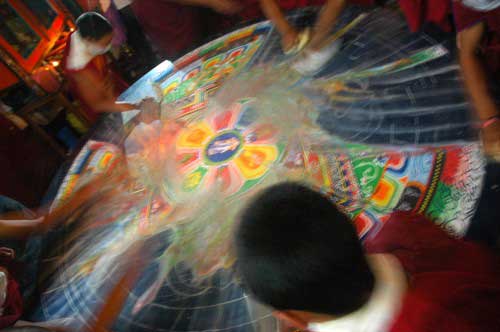 Everything is impermanent so hold on tightly and let go lightly.
Image by Wonderlane

A few months ago, while enjoying some nice long walks, I listened to a very entertaining and thought-provoking audio series called, Out of Your Mind by Allan Watts. His thoughts on Zen Buddhism and the nature of consciousness are very powerful. Based on what I just wrote, you might think that it was some stuffy, boring lecture series, but it was all done in a candid, relaxed and often humorous way.

So, what does Zen have to do with minimalism? Quite a lot actually. Zen is about discovering enlightenment, focusing mind and body, meditation, questioning the meaning of consciousness and the nature of reality. Becoming more awake and aware of our surroundings in order to reassess our priorities and focus our intentions are major components of minimalism as well.

When we say that some thing is “mine”, what are we saying? We are saying we identify with that object. Rarely do people stop to ask themselves, if we consciously want this thing to represent part of us, or demonstrate some aspect of ourselves – or if we are reacting to current trends in the media.

Persuasive advertising will attempt to convince us that when we own something, it will enhance our sense of self. This coercive advertising tells us that when we have this thing, people will think we are hip, sexy, smart, or rich. We may think it will make us feel more like the kind of person we admire and strive to become. Many are lured when beautiful, famous people advertise a product and say it’s great.

But the truth is, this thing cannot change who we are. In essence, even though we have a physical body, we are not a thing. We are consciousness. We are energy resonating at a frequency that forms this shape for now. Sometimes we need a reminder to be the greatest version of ourselves rather than identifying with our stuff too much. Physical things are temporary, while energy is eternal.

This topic is related to another post entitled, Does Your Stuff Own You?