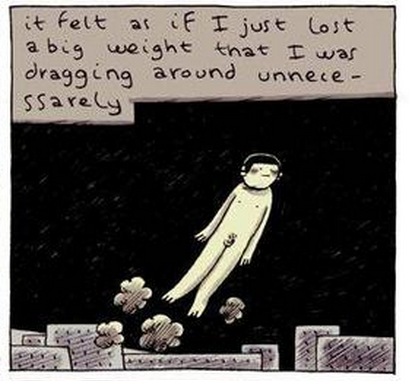 This post is a discussion about a wonderful depiction of an artist’s journey to reduce his possessions, called “The Weight of Things“. Alex Noriega draws and writes about his experiences in such a way that we can feel the raw honesty of his struggles and joys.

Interestingly, there were both positive and negative events in his life that led to his decision to become a minimalist… namely, falling in love, the desire to travel, plus he was not getting along with his family, which helped to motivate this big life change.

A lot of people attempt to transform their lives based on what they figure they “should” do, which is inherently coming from a different place than doing it because we feel excited to do something new. Feeling that one really “ought to” reduce their stuff, immediately makes the process more difficult, compared to happily reducing possessions so one can accomplish another feat one wishes to do, such as going on an adventure.

The majority of the time when I reduce my stuff, it’s so I can be lighter to travel. I move to a new home about once a year. Moving is a happy occasion that I look forward to, and I feel that it’s very rewarding to streamline and organize my belongings before moving.

Alex reminds us that when we first begin to pare back our belongings, it may feel overwhelming. When confronted by a lifetime of collections, hobbies, gifts, books, and memorabilia, it can be difficult to even know where to begin. Luckily, he finds people he cares about to give the most meaningful items to, and donates 3/4 of his clothes to charity.

He mentions the problems with items that he may have held onto indefinitely, “just in case”, or because they were gifts that he’d otherwise feel guilty to part with. Some people who don’t know me so well, might mistakenly assume that my heart must be pretty darned cold to carelessly do away with things so easily. However, I do in fact have a soft spot for some things that don’t make a lot of sense to hang onto… like my beach glass that took many years to collect a small handful of rounded, sanded blue glass. We all have our challenges to face.

I love that Alex divulges that he’s always felt very attached to his stuff, and why. In his situation, he felt that his possessions protected him in his space. “The more stuff I had, the safer I felt”, is a common sentiment felt by hoarders as well. He also alluded to the reality of having to defend his room and his stuff from his siblings.

Once he begins to significantly reduce his stuff, he begins to find joy in not only in his success with the process but in the way the experience makes him feel. He is enjoying the lightness and the freedom it brings. He also noticed the sense of space in his room had expanded.

He is thinking hard about the nature of objects and the power of memory. He realizes that the objects themselves may not hold the memory, but we attach our “abstract meaning to objects all the time”. Does everything contain the essence of consciousness? Perhaps it does. However, that doesn’t mean that we need to hold onto everything that has ever held meaning for us in our lifetimes. We need to release our old items, with thanks and maybe a few tears, and move on. Memory is important, but if we kept everything, we would be drowning in stuff and living in the past with no space to create our futures.

In the end, he has drawn an open window with the liberating future lying just beyond his old room.