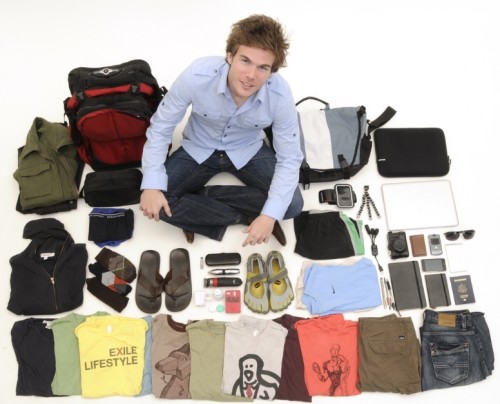 If you took only 55 items to travel the globe indefinitely, what would you carry?
Image of Colin Wright from Exile Lifestyle

Perhaps you’ve also noticed a perplexing paradox that’s happening here. Many, many people are asking, “I want to be more minimalist, so what should I buy to achieve this? Maybe you have also experienced this contradictory phenomena. I realize that it’s an oxymoron, but the fact remains that in this physical world, we still need some physical items to accomplish the stuff we want to get done.

For me, one of the best aspects of minimalism is that it can help to keep my objectives simple and clear. The idea is not to make life more complicated by reducing my stuff until I have effectively made everything awkward and difficult to manage. For example, I’ve made the mistake of getting rid of some necessary objects, then had to replace them because I realized their importance a bit too late. Now I am more appreciative of my spatula!

Abundant Minimalism is based on reducing only what each of us deems as extraneous or superfluous. I kept the best things that I had. I kept the things that were the most useful, and the most cherished, and added better quality items, and more multifunctional items. I released anything that was not special in any of those ways.

When I read that someone pared down their belongings to 57 things to go travel the globe, it immediately made me very curious to see what was in their bag. Even more interesting would be to know the items in their bag that they still found useful and important enough to carry everywhere a year or two later.

That was the spark of the idea for my “Made to Last” list. Being minimalists means that we more carefully consider what we have deliberately chosen to add to our select collections of possessions. So, I am compiling a very refined list. Initially, I was going to include some incredible items that I use for my passions like cycling and camping, but decided to limit the list to only the most awesome things that most people use every day. It’s the start of a super minimalist buying guide.

If you have one top notch item that you think should be on the Made to Last list, please let me know.