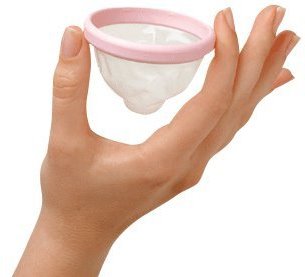 When a Walking Dead episode has a gruesome amount of blood and gore, many people find that thrilling. For some reason, menstrual blood doesn’t generally get the same reaction. I realize there are a lot of dudes out there who may think this is irrelevant, plus a bunch of squeamish people of any gender, however, I feel that it’s important and I will keep it super brief…  And yes, this IS about minimalism.

Rather than buying thousands of tampons or pads, there’s another option.

Since about 1992 I’ve been using a menstrual cup. It is revolutionary. It saves tons and tons of waste materials from entering the landfills every year. Rather than having blood soaking all sorts of absorbent materials and then throwing them away, the solution is a little plastic cup. It’s a simple and beautiful solution. It catches the blood, which is rinsed off. I’ve saved a lot of money too because it can be reused for years. It’s also super easy to use. It’s painless. It’s great.

If you’re female, buy it for yourself, your sister, mother, friend. Thanks for making the world a bit more awesome, simply by being a minimalist.