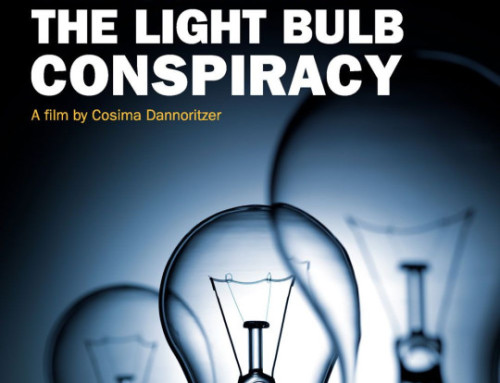 The Light Bulb Conspiracy: The Untold Story of Planned Obsolescence

Not so long ago, products were made to last as long as possible…

Planned obsolescence is “a policy of producing consumer goods that rapidly become obsolete and so require replacing, achieved by frequent changes in design, termination of the supply of spare parts, and the use of non-durable materials.” – Apple Dictionary version 2.2.1

The documentary, The Light Bulb Conspiracy: The Untold Story of Planned Obsolescence reveals the many ways that products are designed to last a shorter time which forces people to buy new products sooner than necessary and the effect that has on everything.

“If the consumer does not purchase, the economy is not going to grow” and that’s a huge problem, since the entire system is based on non-stop growth. However, incessant growth is not a balanced healthy plan, as it’s completely unsustainable.

Since the 1920’s, “manufacturers started shortening the lives of products to increase consumer demand”, such as making light bulbs more fragile and lighting for far fewer hours.

Thomas Edison’s first bulbs lasted a whopping 1500 hours. Even better, in 1924 the advertised longevity of bulbs was 2500 hours, but the documentary shows evidence that the world-wide Phoebus (or “International Energy”) cartel of light bulb manufacturers reduced the average lifespan to a mere 1000 hours within a matter of a few years.

Dozens of patents were filed in the following decades, to improve upon the light bulb, including one made to last 100,000 hours, but none made it to market. Shockingly, a lightbulb exists that has been burning continuously since 1901. (That’s well over 100 years!) There’s even a webcam to track the bulb’s amazing longevity. Gizmodo wrote a great post about it here.

However, “An article that refuses to wear out is a tragedy of business.” – Printers’ Ink: A Journal for Advertisers, 1928

In the mid 1920’s, the combination of mass production, falling prices, and a booming economy saw people shopping for fun rather than need.  Then in 1929 the US wall street stock market crashed and the Great Depression began. In 1933, a quarter of the labour force was unemployed.

Bernard London, a prominent real estate broker in New York, wrote a book entitled, “The New  Prosperity”. In the first chapter he proposed,“Ending the Depression Through Planned Obsolescence”, and for it to be made compulsory by law. (it was not enacted) All products were to be given a set expiry date. The idea was to keep people consuming and employed in factories to fill the incessant demands of those consumers. This is why I often think of business as busy-ness… keeping the masses occupied, distracted, tired and fearful.

By the 1950’s the idea had evolved from legal forcing, to psychologically seducing the public into accepting planned obsolescence.

Brooks Stevens, an industrial designer of appliances, cars and trains, was an American advocate of planned obsolescence.

Unlike the European approach of the past where they tried to make the very best product and make it last forever; meaning you bought such a fine suit of clothes that you were married in it and then buried in it, and never a chance to renew it; the approach in America is  one of making the American consumer unhappy with the product that he has enjoyed the use of for a period, have him pass it on to the second hand market and obtain the newest product with the newest possible look. – Brooks Stevens

After decades of mass marketing to persuade people to always crave the latest model, the ‘American Dream’ became the goal of attaining freedom and happiness through unlimited consumption…