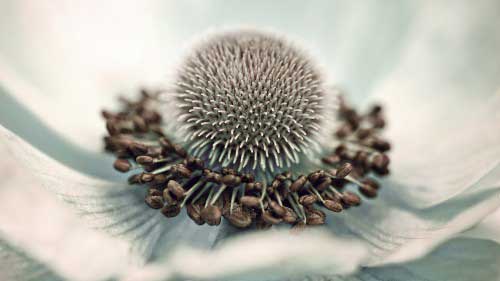 Flowers are such minimalists. Keeping only what is necessary, yet utterly, perfectly beautiful.
Image by >Cluke

A user on the SubReddit /r/minimalism posed an interesting question; ” Why are you here (on r/minimalism)?” The reasons people give for their attraction to minimalism are varied, yet there are some intriguing patterns. Here are some of the top reasons why you love minimalism as much as I do.

Many people are drawn to minimalism as a response to being raised in a cluttered home. Whether it’s a situation of hoarding, or simply feeling crowded by too many possessions, this can be the impetus to begin to live more intentionally and more simply. As someone who grew up in a crowded environment, I can relate to this. It’s one reason clear spaces are especially appealing to me.

There are also artists who are drawn to the clean lines and crisp aesthetic of minimalism. Some minimalist art can also appear overly stark and barren, but that may be the feeling the artist is trying to evoke. Minimalism in design, art and architecture can be a beautiful thing. Architecturally, I think that minimalist buildings feel more modern, spacious and clean. As an artist myself, and someone who has years of hands on experience with building and renovation, I can appreciate the challenge of creating a minimalist look. Creating something that looks simple and is super easy to use, can actually be very complicated to achieve.

“Simple can be harder than complex: You have to work hard to get your thinking clean to make it simple. But it’s worth it in the end because once you get there, you can move mountains.” ― Steve Jobs

People attempting to live more simply in a more extreme way, such as living off of the grid, may find that “simple” is a relative term. Living without the constant distractions of modern technology can be calming and wonderful. Chopping firewood and heating with wood may be zen, but it is also a very time consuming and messy activity. Carrying water to heat, to later have a shower, can be a heck of a lot less simple than hopping in a shower in the city. I have lived both ways and see merits in both lifestyles. Each minimalist must decide what kind of ‘simple’ we want our lives to resemble.

Some people are in a competition with themselves or others to reduce the number of their possessions. As in, “Hey guys, look how much stuff I don’t have.” I can understand that. They spent a lot of time thinking about what was most important to them and then made a huge effort to reduce their things. They want some recognition among people who can appreciate their achievement. An empty-room-and-a-bed is not so exciting to look at, but the accomplishment is applaudable.

If I asked you why you love minimalism, you may say it’s because you love the simple living aspect. To me, this part is about slowing down and clarifying our life paths. Uncluttering our physical space is only one part of minimalism, but uncluttering our schedules and our minds is an entirely distinct level of the experience. Imagine how different so many lives would be if they could stop and reorganize their habits and patterns. A lot of people don’t realize that they could stop feeling like they are running on an endless hamster wheel to nowhere. Look, I know now that we can’t change anyone’s mind about anything unless they are ready and motivated to change. So I’m not trying to convert anyone. If someone says they enjoy feeling stressed, and they call it ‘exciting’, no one can prove them wrong. However, if they could remove some unpleasant obligations and distractions between themselves and their goals, I’m sure they’d enjoy that too. It’s worthwhile to streamline our schedules in order to have time for the aspects of life that we love and find most important.

Click here for part two of this investigation into “Why You Love Minimalism Too”.