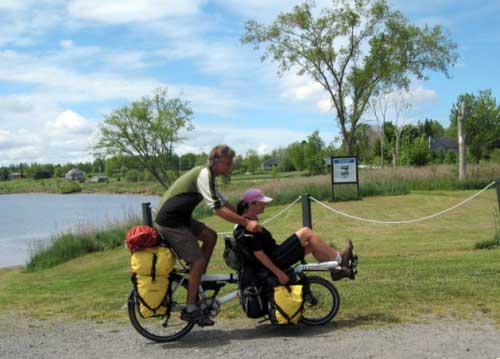 Our tandem bike loaded with enough camping gear for the whole spring & summer
M. B. Lauzon

Until a few years ago, I had never considered the possibility of going on a very long bicycling trip, however it was one of the best things I’ve ever done in my life. We went on an exciting cycling tour from Ontario, Canada to Newfoundland and the edge of Labrador, then back again.

I’m in my mid-forties and have recently embraced the joy of extensive bicycle riding.  A few summers ago, I cycled over 5000 km on a camping adventure to the East coast of Canada. It’s amazing how far one can get by simply not turning around. It’s a matter of keeping the wheels spinning. – Michelle Lauzon – Amazing Minimalist Vehicles

Although cycling was not on my radar until recently, my husband has always been an avid cyclist, and worked for a while as a bicycle courier in Toronto. He is so keen to pedal, he will even brave the winter winds and get out there on any dry day he can manage. He really wanted to share his passion for cycling with me.

The few times we attempted to cycle together didn’t go so well. Although I have been an athlete for much of my life, I didn’t have a lot of cycling experience. So, when we went biking, we got separated almost constantly, as I stopped for lights and took longer to process traffic decisions. I also had almost no practice changing gears for hill climbs, so it was frustrating for both of us and we stopped going biking together.

In 2011 we bought an incredibly awesome tandem bicycle called a Pino Tour, made by Hase. We chose this tandem because:

Other tandems are deficient in many areas. For example, the person in the rear seat of a standard tandem tends to be the female half of a couple, and generally smaller, so she can never see ahead to where they are going. It would be less easy to communicate with each other. With the Pino, we can both see each other, and our heads can get close enough to kiss if we choose to. Because the front is a recumbent seat, I can sometimes have my hands free to check a map, compass, reach for snacks, or get out rain gear, etc. while rolling. The recumbent seat is much more comfortable than sitting on a bike saddle for days on end. Regular bikes also caused me a lot of pain in my wrists, due to the upended angle of the seat in relation to the handle bars, but there’s no problem with that on a Pino.

The first year we had the Pino, we went riding all spring and summer. We lived near an old railway track that had been decommissioned and converted into a wonderful nature trail. It was a perfectly groomed trail, with only gentle hills, that went on for many kilometres through some lovely countryside. We would travel about 50 kilometres to another town to stop for coffee, then head back home again. We did this a lot. It was great training and tons of fun.

During that first winter, we decided to plan a long trip to Eastern Canada. I had never been there, so I was keen to check it out. We did lots of indoor rowing to keep fit over the winter until we could cycle again.

click here to read more about our Minimalist Cycling Adventures