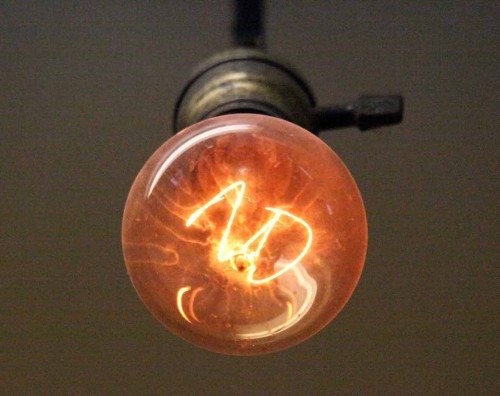 This is the oldest light bulb in the world that has never been turned off in over 100 years!
Image by gizmodo.com

The good news is that people all over the world have started acting against planned obsolescence.

When the batteries died in the first ipods, customers were advised to replace the entire $500. piece of hardware, even though the item was under 18 months old. An unhappy (and media influential) customer, started a website called “ipodsdirtysecret.com” which got millions of views. Apple was sued in 2003 by Elizabeth Pritzker and Andrew Westley in a class action suit for the planned obsolescence of the the 3 million ipods sold in the US in the first 2 years.

Apple set up a replacement service for the batteries and extended the warranty. The claimants were offered compensation as well. (Yet, ten years later, I bought an Apple laptop which provides the purchaser no access to the battery. Looks like another remedy is needed.)

Waste from the first world is sent by container shiploads to poorer nations, such as the electronic waste that is sent to Ghana. They get around the international laws by declaring the waste, “second-hand goods” although the items are nonfunctional. The e-waste is destroying their waterways and jeopardizing their futures. Their “country is being used as the world’s trash bin.” “Posterity will never forgive us…(and) the throw-away-attitude… of people in the advanced countries.” – Mike Anane

We’ve come to realize that the planet that we’re living on cannot sustain that forever. There’s a limit to natural resources and there’s a limit to the energy resources that we have. Warner Philips (descendant of the Philips dynasty of light bulb manufacturers).

Philips now produce an LED bulb that lasts 25 years, while promoting sustainability as the best business model, and factoring in the true costs of the resources being used, as well as the energy consumption involved in manufacturing and transportation. If the prices reflected the true costs, then there would be a huge incentive worldwide to make products that last ‘forever’, rather than being as ‘disposable’ as possible.

A group called “Cradle to Cradle” encourages the rethinking the engineering and production of consumer goods. Their motto is, “Remaking the way we make things”. They state that, “If factories worked like nature, planned obsolescence itself would become obsolete.” There is no waste in nature – only nutrients. Any excess becomes nutrients for other organisms.

This revolution is called “Degrowth”, based on the fact that infinite growth is not possible, so we need to reduce our environmental footprint by reducing our waste, overproduction and overconsumption. By doing so “we get more free time to develop other forms of wealth that can’t be exhausted, for example friendship and learning.” “If happiness was dependent on our consumption level, we’d be 100% content.” Critics of the Degrowth movement worry that it will destroy the economy and take us back to the stone age, but the proponents disagree. “Anti-growth society meets Ghandi’s vision:  ’The world is big enough to satisfy everyone’s needs, but will always be too small to satisfy individual greed.’”

“We increasingly rely on objects to give us a sense of self-esteem and identity… rather than membership in a community or our relationship to the land… which have been replaced by consumerism.”

You can watch the full documentary,The Light Bulb Conspiracy: The Untold Story of Planned Obsolescence, here.