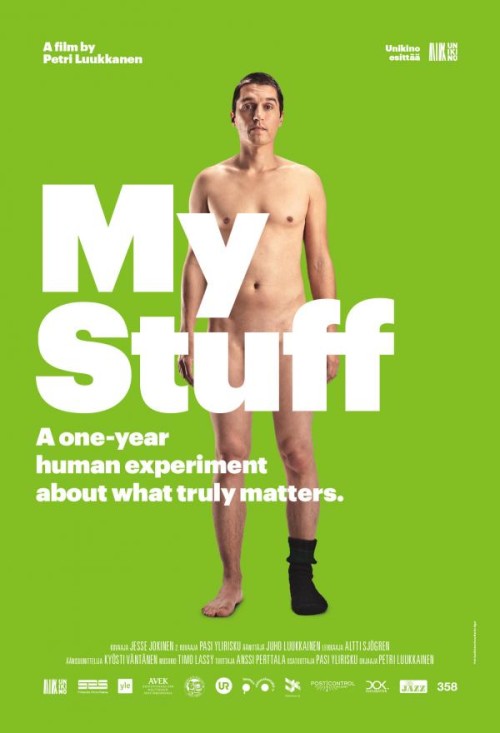 “My Stuff” A one-year human experiment about what truly matters.
Image by Petri Luukkanen

“My Stuff” (or “Tavarataivas”) is a documentary film about a guy doing an extreme experiment in minimalism. It was so quirky and heartwarming and I have thought of this film so many times since I first watched it, that I watched it again!

Petri Luukainen was having a difficult time deciding what was relevant in his life and what would make him happy. So he removed absolutely everything and put it all in a storage facility.

He didn’t just pack up and move out, he started completely naked, in Helsinki, Finland in winter! (Egads!) He also made a rule that he could not buy any new or used stuff.

Over the course of a year, he allowed himself to choose only one item per day to take out of storage. In this way he discovered the stuff that was most useful and important to him. Using this process he finds a sense of balance and moderation that was previously missing in his life.

He learned that without stuff, the people in his life took on greater importance. For example, without a clock, he relied on his brother to wake him for work. There are very touching moments in the film when he consults his kind, wise and inspirational grandma and his insightful young cousin. His grandma reminds him that everything will eventually be left behind when we die anyway.

By conducting this experiment, he resolved the question for himself, rather than constantly wondering in a never ending loop. He made full use of this opportunity to re-evaluate his belongings and his life.

Once he retrieved between 100-150 items, he began to worry he’d get to the cluttered distracted state he was in before. “Just one item closer to the mess of having too much.” Without all of that stuff, he felt so much energy and freedom. There was no stress, no facebook, no mobile phone. It was liberating with lots of free time.

Three years earlier, he had been racking up debt on his credit card to fill his apartment with unnecessary items. When he had been so focused on his belongings he wasn’t happy with his life. “My stuff began to define who I am.” “My flat is now full, but I still feel empty. I need room to think why I am not happy.”

His wise grandma said, “Your things aren’t a measure of your happiness, and your life isn’t made of your things. You need to get that somewhere else.”

At the end of the experiment, he uses a couple of hundred items and the storage space remains about half full. He says, “Possessing is a responsibility, and things are a burden. However I decide myself what kind of a burden I want.”

Now, looking back, he admits that he was buying stuff to make himself feel better. He had thought if he bought more things, it would make his life easier, but actually acquiring a lot of stuff takes a lot of energy.

A car is a perfect example of this. First you have to earn the money to buy the car, then pay for the insurance, parking, tickets, gasoline, cleaning, maintenance …etc. It’s one item that takes so much attention. Now he borrows / shares a car with a friend.

“You don’t own your stuff, your stuff owns you. If you live with radically less stuff, it will reflect in every part of life, in how you eat and travel.” Petri is clearly working toward a more sustainable lifestyle that not only helps to improve his own life, but that of the entire planet and everything on it.

How do you think you’d do it if you locked away everything you own? What do you think would be the first item you’d choose to retrieve? It would make you question what you value most of all, and see so clearly the things that provide comfort and utility in your life. What are your ultimate essentials?

“My Stuff” is a wonderful documentary about discovering the value of material objects and contemplating what’s really important in life.

I conducted a similar experiment of simple living, starting with little more than a map, a car and a tent. When things get overwhelming, it’s nice to know that we can hit the reset button on life.